Most of us mainlanders may not have visited Alaska, let alone its National Forest. So for those of us without flight fare, here, take a look: 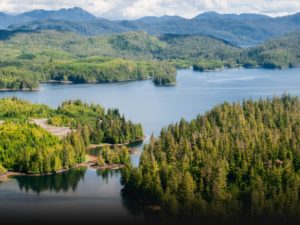 Recently, the Trump Administration, prompted by a request from Alaskan state officials, proposed to roll back Clinton-era rules regarding construction and logging in nationally protected forests.

Within any of the 58.5 million acres of inventoried roadless areas in our National Forest System.

Alaskan officials complained that limiting road construction and logging through the Tongass, roughly 17 million miles (9.2 of which are roadless), was harming the local economy. The message is that without the stable income that year-found manufacturing jobs can supply, denizens of Alaska are suffering.

“Every year we lose more of our loggers because there’s not enough to keep everyone going,” says the President of the Alaska Forest Association, Owen Graham.

Does this rhetoric sound familiar, perhaps echoing the calls of coal miners running out of coal to mine in Pennsylvania or oil refiners with historically less oil to refine?

Conservationist groups are already bemoaning the Trump administration’s decision to grant the Alaskan rainforest, the largest temperate rainforest in North America, an exemption.

You see, as with the Amazon rainforest and the Indonesian rainforest, the Tongass absorbs an enormous amount of carbon dioxide from the atmosphere.

Removing the protections of the Roadless Rule not only risk speeding up climate change, by eliminating a vital carbon sink, it also risks damage to the fishing and tourism industries in Alaska.

The Tongass is a huge tourist attraction and houses wildlife not found anywhere else in abundance on the continent. For example, prior to the logging restrictions of 2001, industrial logging damaged salmon streams, which are a huge economic boom for the Alaskan economy.

If passed, the exemption will release 165,000 old-growth acres and 20,000 young-growth acres from its previous protection into the hands of out-of-work Alaskans.

This isn’t the first time an attempt has been made — President George W. Bush also tried to remove governmental protection of the Tongass. However, the EPA will have to issue a final impact statement, and conservation groups are confident they won’t amass enough evidence in favor of logging the Tongass to justify its exemption.

It’s affecting the range of animal species roaming the Earth.

For example, the Hermit Thrush has always spent its summers in Vermont. Soon, however, it will more likely only be spotted in the winter. Warmer temperatures will send it flying to Canada.

Further south, the Brown Thrasher in Georgia is likely to lose 98% of its summer range due to rising temperatures.

There are a total of 389 species classified as “vulnerable,” according to a study conducted by the National Audubon Society. The study accounted not only for higher temperatures, but for rising ocean levels and more persistent wildfires as well.

Species will either be forced to adapt to its conditions, move elsewhere, or will diminish and die out entirely. In fact, according to a recent paper in the Science journal, the number of birds in the United States and Canada has declined by 29% since 1970.