In supermarkets, the produce section looks pretty much the same year round. But if you pay attention to how things grow, to what’s in season when, you’ll enjoy each plant in the best version of itself. And according to many medical traditions, you’ll be attuning your body to the energy of the world around you as well. Most people think of salad greens, or perhaps of potatoes, when they think of vegetables. But in summer, a time of expansion and ripening, the vegetable fruits come into their own. These are fruits, botanically speaking, but grow on vines or plants, not trees, and are lower in sugar than what most people consider fruits.

The all-American nightshade family of plants is probably most famously represented by potatoes, and perhaps tobacco. Not everyone realizes that the “superfood” goji berries are in this family too. Summer is the time for true abundance of nightshade vegetable fruits, versatile and delicious. Fully half of the veggies featured here are nightshades: tomatoes, tomatillos, bell peppers, chili peppers and eggplant. Three more on the list are vegetable fruits from the Old World, and finally I include a cactus paddle and an absolutely essential green, one of my all-time favorite weeds. 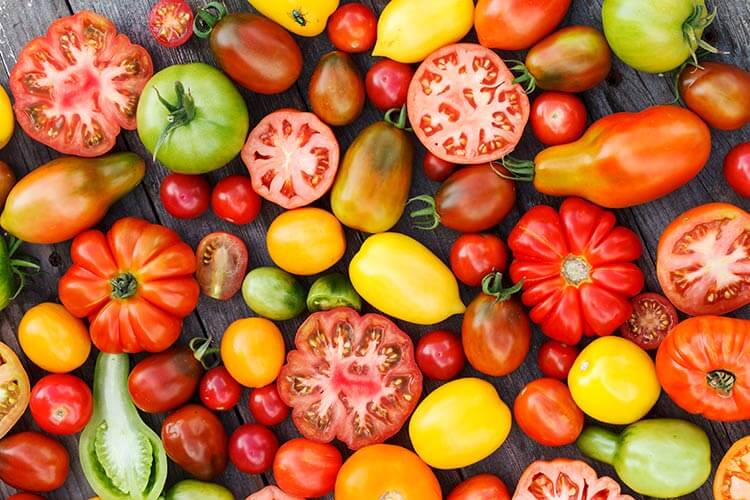 Don’t chastise me for starting with tomatoes, as they really do offer something for everyone. It’s hard to imagine Italian or Indian cuisine without tomatoes, but before the discovery of the New World, tomatoes, together with potatoes, eggplants and other nightshade plants now ubiquitous in European and Asian cuisine, were unknown in Italy and India. The Italians were early adopters; elsewhere in Europe they were considered poisonous and grown exclusively as ornamentals for a couple hundred years.

Tomatoes are used in myriad ways in cuisine, from being eaten fresh off the vine to being blanched, skinned, cooked, deseeded, pureed and used as the basis for many sauces. Green tomatoes stored in a paper bag will ripen through the winter. Canning and sun-drying, originally also preservation techniques for winter storage, concentrate and complexify tomatoes’ flavor in interesting ways, so that canned tomatoes or tomato puree and sun-dried tomatoes are now specifically used as whole different ingredients.

On the “food as medicine” front, for the past 10 years, everyone’s been aware of the tomato as a great source of the antioxidant lycopene. And for this entire 10 years, controversy has raged as to whether tomatoes yield more lycopene cooked than raw or if it’s just that the cooked tomato is more concentrated, whether it needs to be cooked and reduced for prolonged periods or briefly heated to 180 degrees. I’ve seen far more debate on this than explanation of why we want lycopene in the first place! Briefly, it is an antioxidant in the carotenoid group, and as such it’s considered protective of the heart and circulatory system, as well as helpful in preventing many common cancers. It’s also been used to treat the HPV virus.

Tomatoes are also versatile in terms of variety. From the delicious sungolds – candy-sweet, golden cherry tomatoes – to the brandywines, huge heirloom reds, they literally come in all shapes and sizes, and in pretty much every color except blue… and they do come in black. Once you get them started, they’ll keep pumping out fruit all summer, and in a great variety of locations. Mediterranean climates are ideal, but with some attention and careful watering they can be grown both in much hotter and much cooler climates. Hothouse tomatoes are a year-round convenience and can be grown almost anywhere, but they don’t taste like “real” tomatoes. Enjoy the fresh ones of summertime! 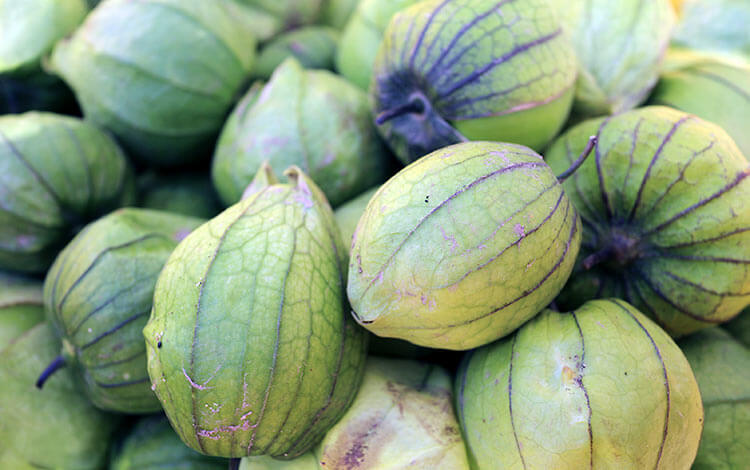 Moving from the ubiquitously famous to the unfortunately obscure…

Tomatillo, which simply means “little tomato,” is a savory little fruit that comes in purple and white varieties, just like eggplant. In fact, it tastes somewhat like a juicy, slightly sweet eggplant. It’s delicious raw, can be dehydrated into chips, is great in chili, and once you’ve made salsa with tomatillos, you’ll never want to make it without them again. Although they are easy to grow, especially in Mediterranean-type climates, and the plants just keep on producing all season once established, tomatillos are somewhat underrepresented. Not many farmers grow them, explaining that they can’t sell enough because people don’t know about them. So here’s a circular awareness/education issue. Please, do everyone a favor and seek out some good, ripe tomatillos. They are a little smaller than tomatoes. They grow with a papery husk covering them and, as mentioned, come in purple and white varieties. In either case, you should avoid green ones; as usual, this indicates unripeness and poorer taste quality. 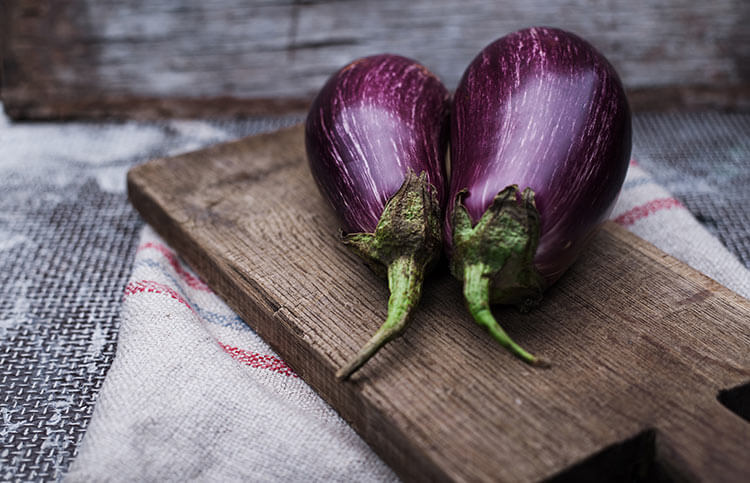 Eggplants are another vegetable (or vegetable fruit) that it’s hard to imagine Eurasian cuisine without. Middle-Eastern food without baba ghanoush? Thai curry without eggplant? No baingan bharta? No moussaka? But these are New-World nightshades too. These also come in more shapes and sizes than most people recognize. The stereotypical vegetable is the large, swelling, bulbous purple one, but they come long, skinny and finger-shaped as well, in purple and in white, and they come in tiny, flat, round varieties too.

Unlike tomatoes and tomatillos, you can’t just bite into a raw eggplant and eat it. That wonderful purple hue is indicative of polyphenol content, another form of antioxidant you’ve probably heard of in association with berries, chocolate and coffee. In the context of eggplant, it’s also associated with bitterness, especially in bigger and older eggplants. If you slice the eggplant thinly and salt the slices for about half an hour, you’ll see a dark brown liquid oozing forth. Rinse this off real well, making sure to get rid of the salt as well, and the eggplant will absorb spices and oil much more readily and will cook much more quickly and completely. It’s usually not necessary to do this with the smaller eggplants.

If you want to make baba ghanoush, you get that wonderful smoky taste by cooking the whole eggplant over an open flame. Make sure to pierce the skin in several places to avoid explosion! This is a very messy process no matter how you do it. You’ll see the brownish liquid soak out as the roasting continues. By the time the inside flesh is soft and ready to be mashed and mixed with tahini, lemon juice and garlic, the skin will be completely charred and black.

Otherwise, eggplant is wonderful grilled, roasted or in coconut curries. When grilled or roasted, they’re best marinaded first. Otherwise, their water content is so high that in the dry-heat cooking they’re prone to just spilling their moisture and desiccating. 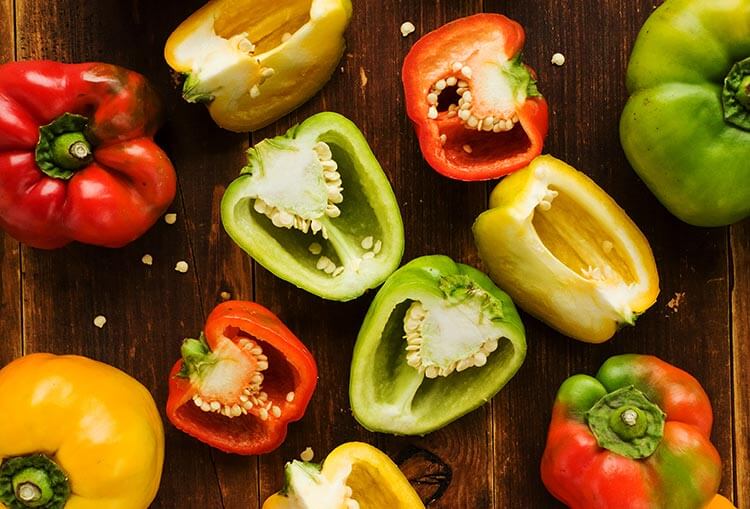 Bell peppers are higher in vitamin C than any of the citrus fruits or other iconic sources. Like tomatoes, they’re full of lycopene and other carotenoid antioxidants, and so they come in red, yellow, orange (the green ones are simply unripe), but they almost complete the rainbow as do tomatoes, with purple and blackish varieties. Much of the year, they’re grown in hothouses; they require long, hot, dry growing seasons. Do yourself a favor and seek out a well-grown summertime bell.

They’re splendidly juicy raw, adding great crunch to salads, and they preserve this crunchiness in stir fries and curries if cooked briefly. They have a seductive, almost leathery chewiness when roasted. Whatever they’re combined with, their flavor tends to be pervasive. A halved bell pepper, either raw or roasted, makes great presentation for stuffing with quinoa salad, hummus, curried lentils or whatever your imagination desires.

Raw vegan cheeses often utilize bell peppers to get the cheesy note. One large bell pepper blended with two cups of soaked cashews and just enough water to get things moving is a good place to start. The addition of a quarter cup of nutritional yeast and some white pepper will make it really cheesy. 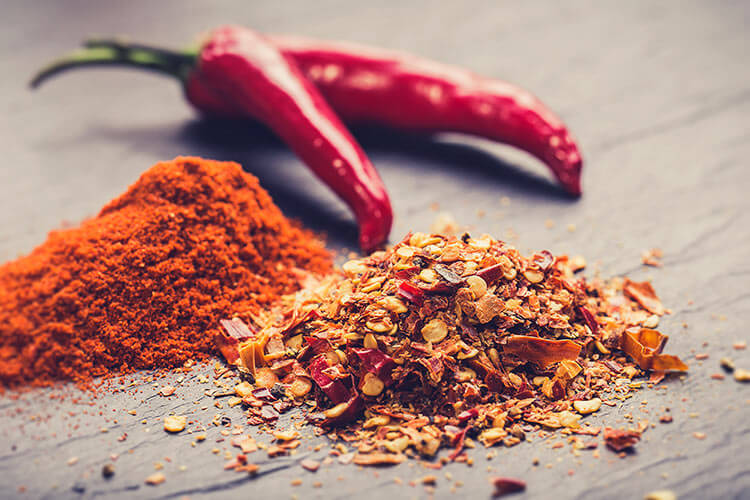 Chili peppers, known as Capsicum, chili, cayenne, paprika, are a whole different universe from bell peppers. In fact, they’re a whole universe unto themselves, spanning a huge variety, from the tiny bird’s eye and ghost chilis to the paprika peppers, which can be at least as big as a bell pepper. Some are as mild as a bell pepper, while some, like the ghost, habañero and Scotch bonnet varieties are so hot you’ll have steam coming out of your ears from a tiny nibble. There’s even a special scale called the Scoville scale just for evaluating the heat of chili peppers. If you do find yourself with steam coming out of your ears, by the way, don’t follow instinct and chug water; it could make things worse. To absorb the heat and soothe your delicate membranes, it works better to take something cool. Milk or yogurt are the traditional antidotes, and non-dairy varieties work too. Coconut milk or cream also work. The other tactic is simple dilution. In places like Thailand where spicy food is served with rice, it’s traditional to take the spicy bite with a greater quantity of rice.

A compound called capsaicin has been isolated from chili peppers, which is a potent analgesic (numbing heat, right?) and which is applied topically to sore muscles. Since the heat is also stimulating to the heart and is a vasodilator (expands the blood vessels), extracts from chili peppers often feature in diet pills.

Stay tuned for Part 2, where we’ll cover the rest of our favorite summer vegetables…