If you don’t know Greta Thunberg by name, I’m sure you’re familiar with her work. She’s the 16-year-old Swedish environmental activist that was behind last week’s global Climate Strike.

She’s been publicly campaigning for at least a year — starting with her weekly climate strikes in Sweden to hold her government accountable to UN emission’s regulations. 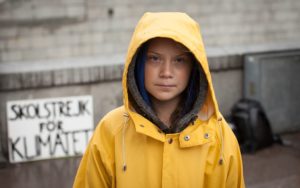 She came to the U.S. (on a zero-emissions sailboat across the Atlantic) for several major events last week. From speaking to Congress, heading the NYC Youth Climate Strike (in which 1.1 million public school students were given the day off of school), and at the UN Climate Summit.

It was a complete demolition.

She told Congress to “listen to the scientists,” (using an Intergovernmental Panel on Climate Change’s special report on global warming as her testimony). She inspired an estimated 4 million to march in over 2,500 events in more than 160 countries worldwide. She delivered an impassioned speech on a panel of young environmental activism representatives at the UN Climate summit in New York this past Monday.

And Greta’s not slowing down any time soon.

Check our blog next week for an update on Greta’s full-solar-power ahead campaign!

Amazon Rainforest Continues to Burn — Seeing Through the Smoke

While 70 of the world’s most influential leaders met at the UN Climate Summit this week, the Amazon rainforest saw no peace.

Now, the Amazon has fires every year.

In fact, according to National Geographic, in the late ‘90s and early 2000s, as much as 10,000 square miles of the Amazon could be subject to deforestation and razed to the ground each year.

Alarming numbers like those led to an international coalition.

When the Public Forest Management Law was passed in 2006, imposing stricter regulations on deforestation, the effect on fires in the Brazilian Amazon was apparent. A mere six years later, the deforestation rate had dropped by 80% from its average between 1995 and 2006. The number of fires fell by the hundreds of thousands as well.

Today, thanks to illegal logging and land-clearing, and Brazilian President Jair Bolsonaro’s pro-development policies and easement of deforestation regulations, 2019 is the most active fire year since 2010 (according to NASA’s Earth Observatory).

This has been a direct result of human efforts.

Scientists are able to determine our human impact by matching areas where trees were felled with the fires that are blazing right now. You see, cut trees get burned to clear the area. More felled trees, more fires.

Bolsonaro’s long-awaited speech at the UN General Assembly didn’t do much to assuage his opposers. He insisted that “the Amazon is not being devastated, nor is it being consumed by fire, as the media is falsely portraying.”

“It is a fallacy to say that the Amazon is the heritage of humankind and a misconception confirmed by scientists to say that our Amazon forests are the lungs of the world.”

He’s right about that — the myth that the Amazon produces 20% of the world’s oxygen is just that. It functions less like a pair of lungs and more like a giant air conditioner, according to the director of the Amazon program at the Woods Hole Research Center in Massachusetts, Michael Coe.

However, it is a densely packed region of carbon dioxide absorption, as it inhales and stores more carbon than it exhales. The Amazon also stabilizes rainfall cycles in South America, and is the richest biodiverse ecosystem on land.

As in… crucial to the fight against climate change.

Global efforts to put out the fires are being made, though Bolsonaro’s comments at the summit don’t mention them.

Eco Highlights — Not Terrible News for the Environment